Sale on canvas prints! Use code ABCXYZ at checkout for a special discount!

This represents the “Blue Flame of Healing” that many spiritual healers use to heal people like the phenom, Canadian-born, Adam, the Dream Healer. To some, this blue flame of healing is known as the blue ray of light which is the first ray of light and is associated with Archangel Michael. According to Free Choice granted by God, when faced with any difficulties in life, neither Angel nor Archangel will help you unless you ask for help. So, this acrylic painting is the first of two phases representing the blue flame of healing. The second represents the flame in action and transforming.

Thank you for liking, commenting and/or sharing. Mary

I took this photo as a comparison between a huge ocean liner carrier and the minimum height of the Golden Gate Bridge. It is so high up that it seems like you could put to ocean liner ships one on top of the other. You can also see some of the roughness of the water in the bay and you can imagine how much rougher it would be in the Pacific Ocean. I also learned that Joseph Strauss was the main engineer and actually had to face opposition to the project in the first place. Strauss had already designed and constructed over 400 drawbridges, mainly inland.

This photo shows most of the expanse of the Golden Gate Bridge. What is interesting to note is that the construction on the bridge started in 1933 and that it was finished ahead of schedule and under budget. This should serve as a signal to today’s society where projects normally go over budget and are not finished on the speculated or planned time. That is my political comment for the modern world. This bridge is one of the most photographer bridges in the world and is considered one of the most beautiful.

This photo is a different view of the Golden Gate Bridge in San Francisco, California. The towers are visible but not the entire bridge. Apparently, there is usually a lot of fog covering the bridge and it remains visible for very few days of the year. We were lucky as the fog was lifting. At one point in time, until 1964, it was the longest suspension bridge spanning San Francisco to Marin County at 4200 feet (1280 meters). It was voted one of the Wonders of the Modern World by the American Society of Civil Engineers.

This is a shot of Waikiki Beach in Oahu, Hawaii. Over the ocean there are storm clouds in the sky and from the bottom, you can see how the rain has started on the ocean. It was very difficult to get any photos as these beaches are almost always full of people swimming and riding the surf. For once, I was able to capture it relatively quiet of people and in the pristine beauty of nature itself. I have always enjoyed seeing rain from a distance. On the prairies you can see the rain storm coming from far away.

This photographic shot was taken in the evening while we enjoyed a Luau on Oahu, Hawaii. The moon is almost hidden by the palm trees even though it is fully in the sky. Who doesn’t like a full moon? There is something spectacular in seeing the whole moon light up the night sky. One of the most amazing things for me is the way the lunar appearance affects entire oceans with ensuring the pull and withdrawal of the waters surf.

This is one of the best photos I have of a solo Bald Eagle. The background was just perfect. I also like the way the plumage is gently flying in the air. Its beak is perfect for what he needs to do. The eye is piercing. Love this photo and the detail.

Did you know that both sexes of bald eagles have the same colouring for plumage? The difference is that the female is actually a bit larger. Eagles have excellent eyesight. “They have two foveae or centers of focus, that allow the birds to see both forward and to the side at the same time.”

I took this photo a couple of years ago. I like it because I really appreciate trees. I enjoy looking at how they grown amongst each other. The Oak tree is a dark bark whereas the birch tree is white with sections of striped black. As we know trees are important for keeping erosion at bay. Plus, we also know that carbon dioxide is absorbed by the tree and produce oxygen for our benefit to breathe and the world too. I like the angle that these trees have taken in an effort to continue to grow. This photo was taken at Assiniboine Forest in Winnipeg.

I took this photo of the Golden Eagle near Lake Winnipeg. I also saw and took photos of Bald Eagles. Their range of living is 200 km2 (77 sq mi) based on what Wikipedia says. This is quite a big territory but not if you are a flying eagle that soars across the skies with ease. They have a partial migration. If they are further north, they usually migrate when living at a latitude of 60 degrees north and shorter migrations if they are at the 50 degree latitude. If you take the location of Gimli, Manitoba they are at 50.6667Â° N, 97.0500Â° W. And if you are at Winnipeg, Manitoba the near center of Canada it is 49.8994Â° N, 97.1392Â° W. These beautiful yet hardy birds will only do a partial migration during the cold months of winter 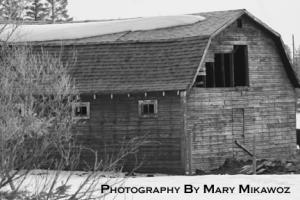 â€śMany years ago, choices for paints, sealers and other building materials did not exist. Farmers had to be resourceful in finding or making a paint that would protect and seal the wood on their barns. Hundreds of years ago, many farmers would seal their barns with linseed oil, which is an orange-colored oil derived from the seeds of the flax plant. To this oil, they would add a variety of things, most often milk and lime, but also ferrous oxide, or rust. Rust was plentiful on farms and because it killed fungi and mosses that might grow on barns, was very effective as a sealant. It turned the mixture red in color.
When paint became more available, many people chose red paint for their barns in honor of tradition.â€ť This information was provided by the Farmerâ€™s Almanac.